Home Erectile Dysfunction
Erectile dysfunction (ED) or impotence is sexual dysfunction characterized by the inability to develop or maintain an erection of the penis during sexual performance.

A penile erection is the hydraulic effect of blood entering and being retained in sponge-like bodies within the penis. The process is often initiated as a result of sexual arousal, when signals are transmitted from the brain to nerves in the penis. The most important organic causes are cardiovasculardisease and diabetes, neurological problems (for example, trauma from prostatectomy surgery), hormonal insufficiencies (hypogonadism) and drug side effects.

Psychological impotence is where erection or penetration fails due to thoughts or feelings (psychological reasons) rather than physical impossibility; this is somewhat less frequent but often can be helped. Notably in psychological impotence, there is a strong response to placebo treatment. Erectile dysfunction, can have severe psychological consequences as it can be tied to relationship difficulties and masculine self image generally . 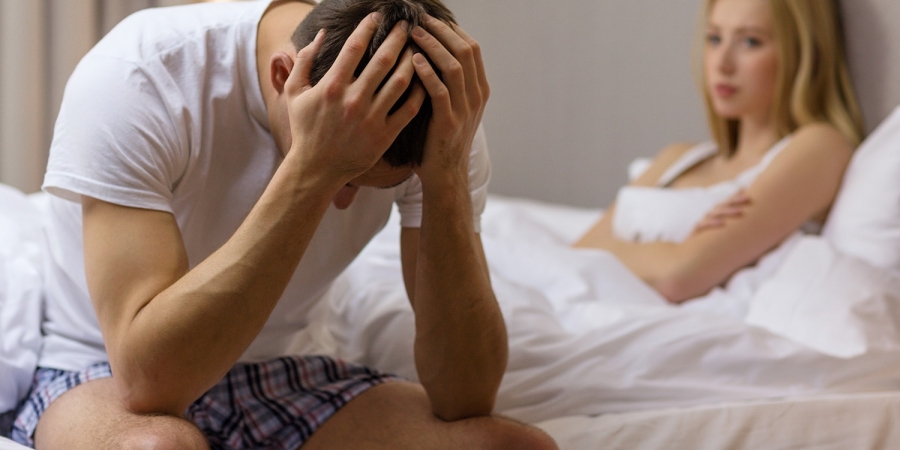 The Latin term impotentia coeundi describes simple inability to insert the penis into the vagina. It is now mostly replaced by more precise terms.The study of erectile dysfunction within medicine is covered by andrology, a sub-field within urology.

Erectile dysfunction is characterized by the regular or repeated inability to obtain or maintain an erection. It is analyzed in several ways:

Surgical intervention for a number of conditions may remove anatomical structures necessary to erection, damage nerves, or impair blood supply. Erectile dysfunction is a common complication of treatments for prostate cancer, including prostatectomy and destruction of the prostate by external beam radiation, although the prostate gland itself is not necessary to achieve erection.

ED can also be associated with bicycling due to both neurological and vascular problems due to compression. The increase risk appears to be about 1.7 fold.

Some blood tests are generally done to exclude underlying disease, such as hypogonadism and prolactinoma. Diabetes is considered a disorder, but is also a risk. Impotence is also related to generally poor physical health, poor dietary habits, obesity, and most specifically cardiovascular disease such as coronary artery diseaseand peripheral vascular disease.

A useful and simple way to distinguish between physiological and psychological impotence is to determine whether the patient ever has an erection. If never, the problem is likely to be physiological; if sometimes (however rarely), it could be physiological or psychological. The current diagnostic and statistical manual of mental diseases (DSM-IV) has included a listing for impotence.

Nocturnal penile tumescence (NPT)
It is normal for a man to have five to six erections during sleep, especially during rapid eye movement (REM). Their absence may indicate a problem with nerve function or blood supply in the penis. There are two methods for measuring changes in penile rigidity and circumference during nocturnal erection: snap gauge and strain gauge. A significant proportion of men who have no sexual dysfunction nonetheless do not have regular nocturnal erections.

Penile biothesiometry
This test uses electromagnetic vibration to evaluate sensitivity and nerve function in the glans and shaft of the penis.

Dynamic infusion cavernosometry (DICC)
technique in which fluid is pumped into the penis at a known rate and pressure. It gives a measurement of the vascular pressure in the corpus cavernosum during an erection.

Corpus cavernosometry
Cavernosography measurement of the vascular pressure in the corpus cavernosum. Saline is infused under pressure into the corpus cavernosum with a butterfly needle, and the flow rate needed to maintain an erection indicates the degree of venous leakage. The leaking veins responsible may be visualised by infusing a mixture of saline and x ray contrast medium and performing a cavernosogram.; Digital Subtraction Angiography: In DSA, the images are acquired digitally.